The Origin of Catholicism in Bloxwich 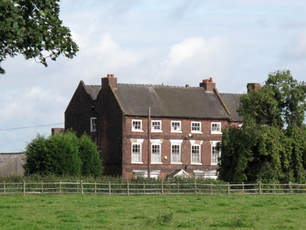 During the Reign of King Henry VIII (1509 - 1547), a law was decreed precluding the practising of the Roman Catholic Faith within the Realm for which the penalty was death. The persecution of those who practised the Faith continued until well into the Eighteenth Century and, consequently, many Catholics resorted to celebrating Mass in secrecy by creating “Priest holes” to hide the Priest within the confines of certain Manor Houses and various other buildings. One such building was reputed to be Yieldfields Hall in Newtown. The Hall is located to the left of the A.34 when approaching Bloxwich from Cannock. It is believed that the ownership of the Hall had, for some time, been biased towards the Catholic Faith and this was confirmed by the accidental discovery of a Priest hole by the current owner.

In 1701, Thomas Purcell of Wolverhampton bequeathed £160 to the Roman Catholic Clergy to be used to support a Mass Centre at Yieldfields Hall. A priest was to spend two nights there on a monthly basis to say Mass, firstly for Thomas' soul and then for his wife's soul. The priest was also to instruct the "poor" Catholics within the area and also to administer the Sacraments to them. Thomas nominated Fr Philip Higgins as the first priest, depending upon availability, otherwise the appointment was left to the Midlands District.

In 1773, a non-resident priest named Taylor was serving Yieldfields Hall, and then later in 1786 the Mass Centre became the responsibility of Fr John Placidus Perry, a newly appointed out-priest from Wolverhampton, who said Mass one Sunday each month.

​In 1791, during the reign of King George III, it was the advent of celebration for Roman Catholics because of the cessation of persecution. The Catholics of Bloxwich were quick to seize the opportunity to practise their Faith openly, and on 15th July 1791 Yieldfields Hall became recognised as a place for Religious worship with Fr. John Placidus Perry being recorded as Priest, and a Certificate was issued to this fact. The Certificate, which was originally retained in the Walsall Muniment Room, is now in the Local History Centre; Fr. Perry paid 5 shillings for a licence. The remoteness of the Hall was considered to be an asset during the days of the persecution, but apparently became an obstacle due to difficulty in travelling.

In c.1800, the ownership of Yieldfields Hall ceased to be Roman Catholic but Mass continued to be said in a small room at the top of the house. Rev. James Gordon left money to support a mission within the neighbourhood and so Fr Perry acquired a small shop with an adjoining room in Harden Lane (now Harden Road, Leamore) to provide a Chapel that was more accessible for the congregation;  The shop was lengthened and converted into a Chapel and a school; the Chapel  was dedicated to St Thomas. Fr Perry appointed an emigre priest as his resident assistant who was later succeeded by another emigre priest. The house and shop which was purchased in c.1800 was adjoined to what was known as Cromwell Cottage so named that it was reputed that Oliver Cromwell once stayed there.

In 1807, a new Chapel was built in Walsall and the task of administering to the spiritual needs of the community fell upon the shoulders of Fr. Francis Martyn. With the continuing growth of the Catholic community in Bloxwich and its surrounding areas, his primary task was to enlarge the Chapel in order to accommodate about 400 people. Due to the expansion of the congregation, he  later hired an assembly room which was attached to the “Green Dragon” public house in High Street, Walsall in order to to administer to the Catholics of Walsall together with Darlaston and Wednesbury whilst using the Chapel in Harden Lane for those in Bloxwich and its localities. The existence of many of the Catholic Churches in Bloxwich as well as Walsall, Darlaston, Wednesbury, West Bromwich and Stourbridge is largely due to the foresight and labours of Fr. Martyn.
In 1827, Fr Martyn had a new Chapel built in Walsall  which was dedicated to St Mary of which he became the Parish Priest; St Mary's Chapel eventually became St Mary's the Mount. Fr Martyn died in 1838 (aged 56) and his remains are reputed to lie buried in St Mary’s the Mount Church and an effigy of Fr Martyn can be seen on the right wall when entering the Church. 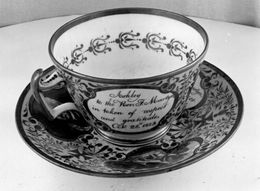 This cup and saucer belonged to Fr Francis Martyn.
In 1823, the Catholic population of Ashley , Staffs, provided themselves with a Chapel even though they had no resident Priest to administer to them. Fr Francis Martyn preached to them at the opening and was presented with a tea service.
The inscription on the cup reads:
Ashley
to the Rev F Martyn in token of respect and gratitude
Oct 28th 1823.