History of our Parish Church 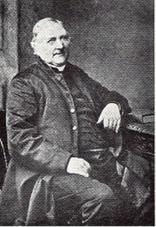 The Church
In the year 1869, Fr Peter Davies, who had by this time been serving as Priest in the Chapel of St Thomas for six years, recognised that the community was still increasing, and so he decided that a new and larger premises was necessary. It was gratifying that a plot of land in the centre of Bloxwich had been donated to the Chapel by Mr Charles Beech, and so, on 14th September 1869 a new Church was opened in High Street, Bloxwich by the first Bishop of Birmingham, Bishop William Ullathorne, and was dedicated to St Peter.The Church was designed by Bucknall & Donnelly of Birmingham, and was built of brick and Bath stone. The building consisted of a nave with a clerestory and aisles, an apsidal sanctuary and a presbytery.
In a message to his people Fr Davies wrote "In looking back and around us and contemplating the result of our united efforts, we cannot but feel that we owe a heavy debt of gratitude to the goodness of God, nor fail to discover the power of combined action, even in a poor people, if they only work with land and heart together. If everyone will co-operate  according to the  measure of his ability we will soon crown our work , and the work crown us".
Fr Davies also said the following:
"Where so many have desired well of the Congregation and of the Church, it would be misplaced, not to say invidious, to single out individuals for special commendation: What Almighty God inspired and blessed in its progress, and eventually brought to a happy issue, let us acknowledge as his work, and to Him give glory of it in the words and with the sentiments of the Royal Prophet:  "Not to us, o Lord, not to us, but to Thy Name give glory", appropriating to ourselves only the honour of having been chosen by Him as instruments to carry out his glorious designs".
​The original High Altar, faced in alabaster, was had erected by Fr Patrick O'Toole on 29th June 1898 to the memory of Fr Peter Davies. ​
Writing about the new Church, 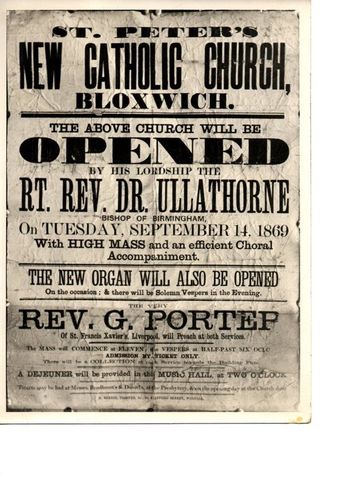 ​
​After World War I, Bloxwich began to prosper with the emergence of numerous housing estates being built on land that had been
originally used for farmland. This general increase in population signified a corresponding increase in the number of Catholics in the area. Bearing in mind that the Church was originally designed to accommodate a congregation of 150, this increase presented a problem of limited seating facilities. In order to overcome the problem, it was necessary to place chairs in the aisles to provide adequate seating for the additional congregation. ​

​In 1946, Fr Michael J Walshe was appointed as Parish Priest of St Peter's Parish. He was ordained in Paris by His Eminence Cardinal Dubois on 29th June 1929 and was inducted after his demobilisation from the Army Chaplaincy in India to St Peter's Catholic Church in September 1946.
​After World War II, the increasing situation regarding seating was worsening due to the emergence of further  housing estates, and so, the Parish Priest at the time, Fr Michael Walshe, considered  extending the Church. The primary obstacle  to and immediate extension was financial but there were also building restrictions that had been imposed following the War. It was also  necessary that Church Services should continue despite the alterations to the Church. In order to  alleviate these financial obstacles, the parishioners decided to implement fund-raising events. Eventually work  began on the extension in September 1952 and was completed in June 1954, amazingly done without cancelling any Church Services.
The modifications, which were designed by Jennings, Homer & Lynch, were to have a great impact upon the interior and exterior of the Church. The Nave was  lengthened to increase the seating capacity and twin towers were erected at the west side, the first tower to house the “Carillon” and the second to house the “Angelus bell”. A large Chapel was erected on the south side and was dedicated to the Sacred Heart and a smaller Chapel on the north side dedicated to Our Blessed Lady. The lawn, which lay to the south of the original building was used as foundations for the Sacristies, the Side Porch, the Work Room and the Confessionals. The Sanctuary was extended by 6 feet and new marble altar rails were installed across the full width of the Church. The original Altar was retained but the Fresco depicting the scenes from the life of St Peter had to be restored from their faded condition. A number of new statues, stained glass windows, crucifixes and other items were donated by groups and also by individual parishioners; these occupy their respective positions in the Church together with all original artefacts from the old Church. The “Stations of the Cross”, which adorn the north and south walls, were also donated by various parishioners.
On Tuesday 29th June 1954, a Solemn High Mass was celebrated to commemorate the completion of the extension of the Church, which not only coincided with the Solemnity of Ss Peter & Paul but also the Silver Jubilee of Fr Walshe. Considering that the extension increased the capacity of the Church to 350, the attendance at the Celebration exceeded 700 which gave cause for a second Mass to be celebrated in the evening. A Solemn High Mass was also celebrated on 1st January 1956 , the Celebrant being Fr Charles J. Walshe together with Fr E. Walshe as Deacon and Fr Michael  J. Walshe as Sub - Deacon (three brothers). It had been a period of 24 years since the three brothers had been together.​
On the retirement of Fr. Walshe in 1967, Fr William Quinn became Parish Priest of St Peter's. Fr Quinn was renown for his "jokes" and was well known in Bloxwich. Fr Quinn moved to another Parish in 1983.
In Jan 1983, Fr Bernard Leo Anwyl was given the position of Parish Priest and was responsible for a number of alterations to the Church of which the first task was replacing the old Presbytery. The old building was regarded as unsafe and "unfit for inhabitation." The new building was completed in 1985.
During the period between 1987 - 1988, alterations were implemented to the Sanctuary which were fulfilled in phases; the two side altars being the primary phase resulting in the Altars being removed bu retaining the two dedicated Chapels. The following phases included the removal of the Altar Rails from in front of the Main Altar together with the re-positioning of the Pulpit and the Font; a new Piety shop was installed in the old Baptistry area.
In 1993, the Murals on the Sanctuary were restored.. As part of the 125th Anniversary year, the Stations of the Cross were restored, and also some of the kneelers were fitted.
On 11 Sep 1994 (125th Anniversary) , Mass (Missa Cantata) was celebrated at the Church by the Very Rev. Terence Brain, Bishop of Birmingham, and then the following week (18 Sep 1994) a second Mass (Missa Cantata) was celebrated by the Very Rev. Philip Pargeter, Auxiliary Bishop of Birmingham.
Following the celebrations of 1994, a proposal was made to initiate a Sheltered Housing Scheme (St Peter's Court) together with a joint Parish Hall and Community Centre).